IR35 Private Sector Expansion: What Will the Latest IR35 Legislation Mean for Contractors, Employers and their Recruiters?

Recent weeks saw the Government’s first IR35 win in nine years, which ordered former BBC presenter Christa Ackroyd to pay a tax bill of £420K, and sets the precedent for future expansion of the legislation. An IR35 extension is predicted to hit the private sector in April 2019 – but what will this mean for contractors and businesses? 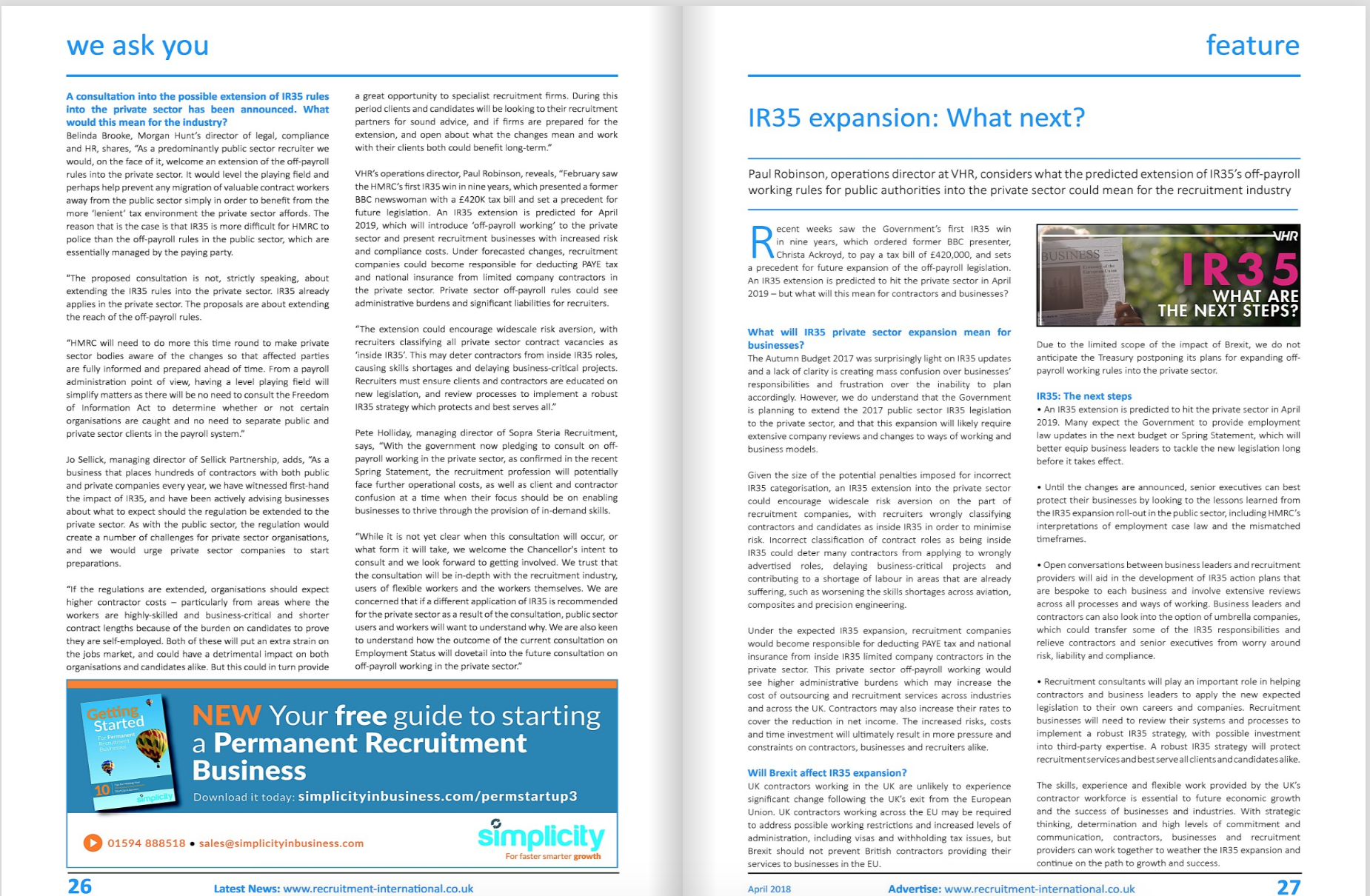 IR35 Update – What Does It Mean for Contractors?

IR35 is a piece of tax legislation first brought in by the UK Government in April 2000 to combat instances of tax avoidance. The legislation applies to contractors who supply their services to clients via an intermediary organisation, such as a limited company; these contractors are not classed as employees, but they would be so if it were not for the existence of the intermediary company.

The expansion will heighten scrutiny on contractors and incidences similar to the Christa Ackroyd case may affect private sector contract workers. Limited company contractors currently receive reductions of 12.8% Employers’ National Insurance, 40% PAYE and partial avoidance of Employees’ National Insurance, and then pay back a 22% corporation tax on all revenue to balance out the costs. The legislation extension of IR35 could reduce the worker’s net income by up to 25%, costing the typical limited company contractor thousands of pounds in additional income tax and National Insurance Contributions (NICs) every year.

What Will the IR35 Private Sector Expansion Mean for Businesses?

The Autumn Budget 2017 was surprisingly light on IR35 updates, and a lack of clarity is creating mass confusion over business responsibilities and frustration over the inability to plan accordingly. However, we know that the Government plans to extend the recent public sector legislation to the private sector, and that this expansion will likely require extensive company reviews and changes to ways of working and business models. Continuing the trend for restrictive and transparent legislation set by GDPR, which will enforce new data privacy regulations on all businesses trading in or from Europe, IR35 will increase business compliance.

Given the size of the potential penalties imposed, an IR35 extension into the private sector could encourage widescale risk aversion, with recruitment businesses wrongly classifying contractors and candidates as inside IR35. Incorrect classification could deter some contractors from applying to wrongly advertised roles, delaying business-critical projects and contributing to a shortage of labour in areas that are already suffering, such as worsening the skills shortages across Aviation, Composites and Precision Engineering.

VHR are incredibly happy to celebrate our 19th birthday and are proud of the achievements of our hard-working employees....

VHR continued to expand in April with plans for further team growth throughout 2022 across both sales and support. Our t...