Olympic Gold medalist Martine Grael has become the latest high-profile female sailor to sign up for the Volvo Ocean Race.

Who is Martine Grael?

Born 21th February 1991, Martine Grael is already an accomplished sailor. Grael and fellow female sailor Kahena Kunze made history by winning the 49er FX class at the 2014 ISAF Sailing World Championships and at the 2016 Rio Olympics. 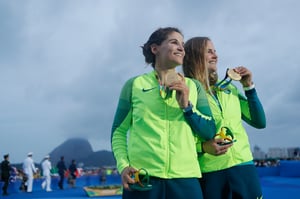 As both a driver and a sail trimmer, Martine is the first ever Brazilian woman to compete in the Volvo Ocean Race, which is known as the longest and toughest professional sailing event in the world. The Volvo Ocean Race is one of the big three sailing regattas, alongside the Olympics and the America’s Cup.

Though this year marks Grael’s first time competing, she is no stranger to the race. Martine Grael’s father Torben Grael is Brazil’s most successful Olympic sailor, with five medals in total. Torben Grael competed in the Volvo Ocean Race three times and won the 2008-2009 edition as skipper onboard the Ericsson 4.

Martine Grael is a member of the Dutch ocean racing team, AkzoNobel, who are currently competing with some of the best sailors in the world to sustain 4th place in the Volvo Ocean Race. The new international team is sailing together for their first time this year and are improving their organisation each day on the water. AzkoNobel crew members won leg 6 of the 2018 Volvo Ocean Race after 20 days 9 hours 17 minutes at sea, a great performance.

Sustainability in the Marine Industry 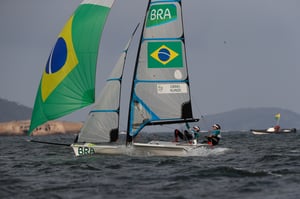 Not just an incredible athlete, Martine Grael also campaigns for a cleaner ocean. Grael says that seeing the number of plastic bottles on boats and running ashore every day has made her aware of her environmental footprint. Grael supports Marine sustainability by refraining from using plastic bags, composting everything she can and cycling rather than using a car wherever possible.

A champion sailor who loves the environment, Martine Grael is passionate about inspiring the next generation of racing teams to combine ethics with the desire to win.

Read about other women in sailing like Ellen MacArthur, or Tracy Edwards.