Ellen MacArthur is as engaged on land as she was at sea - someone who aims to improve the way we live, and change the world with fantastic sailing records. 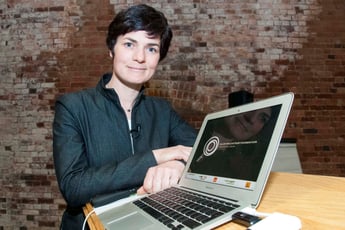 Born on 8th July 1976, during her childhood Ellen spent all her free time sailing with her aunt or reading sailing magazines.

Passionate about marine, she started saving money to buy her first boat at the age of 8. Ten years later, Ellen launched her career in the marine industry by working on an 18.3-metre boat and training adults at the David King Nautical School.

Achieving in the same time her yacht-master and trainer instructions, she won in 1995 the “Young Sailor of the Year” Award after sailing solo around Great Britain.

Despite her incredible aptitudes, Ellen had to start from scratch to find sponsors; tough and resilient, she didn’t give up and raised enough money to buy her own sailboat, a secondhand 21-ft Classe Mini.

Finally sponsored by group Kingfisher, Ellen MacArthur and her new Open 50 yacht competed in the exhausting “Route Du Rhum” race in 1998. She finished first in her class after strong efforts and benefited from a huge support in France.

In 2001, at only 24 years old, Ellen MacArthur raced solo in the “Vendée Globe”. Like before, she surpassed all expectations as she finished the challenge ahead of all but one of her male counterparts.

After this exploit, Ellen was on the front pages of every newspaper and was voted second in the BBC Sports Personality of the Year 2001. The following year, she won the “Route du Rhum” from France to the Caribbean.

She founded Ellen MacArthur Cancer Trust in 2003, working with other sailors such as Shirley Robertson. In collaboration with hospitals, the objective of this charity is to take young people sailing, giving back to them the joy of life after treatment for cancer or leukemia.

In 2005, she made history by becoming the fastest solo sailor to circumnavigate the globe; she set this record on her first attempt. During the crossing, she had with her the absolute minimum of resources to be as light as possible - a good resource management is a matter of life and death at sea.

Aware of the supplies limits, she took the hard decision to end her professional racing career to apply this philosophy on land. After a few years spent with scientists, industrialists and politicians to learn as much as possible, Ellen launched the Ellen MacArthur Foundation in 2010. Its goal is to accelerate the transition from a wasteful economy to a waste-free and circular economy. Three areas are targeted by the foundation: business, education and communication.

Find out more about efforts being made to battle plastic in our oceans.