Why the Sound of Formula One Is So Important

Formula One is famous for its spectacle. Since it began in 1950, F1 racing has utilised cutting edge technology to make motorsport races exciting, visceral and utterly captivating. As one of the most visually striking and exciting sports in the world, Formula One draws in viewers with explosive races, shock victories and dramatic mistakes.

But there’s one crucial element that makes Formula One special: sound.

Formula One's Sound Is Crucial To The Motorsport's Success

Sensory experience is key to what brings fans in to view the motorsport race. You can feel the cars zoom past you; the speed manifests as pure sound, a physical sensation that you could feel in your chest. This is something that only Formula One can do, and something that can’t be captured or replicated through television.

Or it used to. New hybrid fuel systems introduced in 2014 have significantly increased motorsport racing efficiency and speed, but sadly have lowered the noise produced by the cars. This directly lessens the overall experience of watching a motorsport race.

Sound has a direct impact on our other senses, making things seem bigger, faster, and more powerful purely because of the sound produced by them. The newer V6 models only generate 134 decibels of sound. The old V8’s made 145.

Fans and media pundits alike have criticised the new sound, claiming it makes the sport ‘dull.’ Formula One champion Lewis Hamilton agrees, saying, ‘Do I miss the noise of the old cars? Yes. If we can have clean efficient cars that make lots of noise like the old ones, then that would be pretty cool.’ The creation of emotion is key to any sport, and in motorsport that emotion is created by the sound.

How Formula One is Recreating its Sound 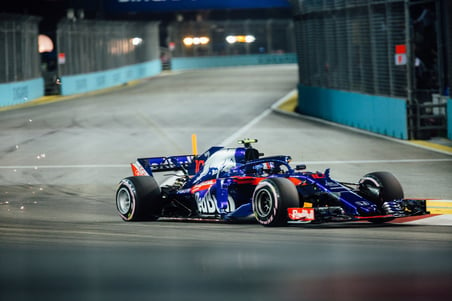 Recreating the sound of Formula One is a business decision, with some motorsport leaders worried a lower quality of sound will drive racing fans away. To remedy this problem, F1 Engineers have been tasked with recreating the sound of Formula One, by inventing systems in the car that generate noise to compensate for the lack of sound generated by the car engine. Rumour has it that the fuel limit will be raised, generating more power and more sound. If the RPM usage increases proportionally with the increased fuel flow, this could increase horsepower to around 1,200 – even higher than it is today.

Those worried that Formula One will return to strictly gas vehicles may enjoy Formula E, a new race category that features electric vehicles. Formula E has far stricter rules than Formula One, with all cars using the same chassis and battery. This means there’ll be less of a gap between the cars at the technical level, putting more pressure on the racing drivers to outperform and outrace each other.

FIA and the car manufacturers are already in talks about the new Formula One car engine specs for beyond 2021, committing to stay with hybrid technology instead of returning to the old fan-favourite V8 engine.

"We've carefully listened to what the fans think about the current power unit and what they would like to see in the future. We want to define a set of regulations to provide a powertrain that is simpler, cheaper and noisier and will create the conditions to facilitate new manufacturers to enter F1 as powertrain suppliers and to reach a more levelled field in the sport."

A focus on fan satisfaction and auditory experience has been spoken about, prompting many fans to be cautiously optimistic that the roar of Formula One will be back soon.

Learn more about Working in Formula One, or Apply for a Job in Motorsport.

How The EU Ban On Combustion Engine Cars Affects The Automotive Industry?

In July 2021, the European Union rolled out an ambitious proposal to effectively ban the sale of new petrol and diesel c...

How The Sprint Qualification Will Change Formula 1

By introducing the Sprint Qualification trial to the sport, all Formula 1 fans get offered more spectacle, races, and a ...

Impacts of Robotic Automation on Formula 1 and Automotive Industry

The world is moving from manual work towards automatic work as it has been found that robotic automation is fast, accura...