The Seabin Project: An Innovation In Marine Sustainability

As tons of plastic enters the ocean every year, the new Australian-based Seabin Project aims to catch water bottles, plastic bags and other debris before it ever reaches the water – here’s how the Seabin Project is driving Marine Sustainability.

What is the Seabin Project? 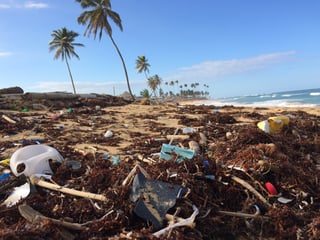 If we can have bins on land, why not in the water? The Seabin Project has launched a variety of floating rubbish bins located in the waters across marinas, docks, yacht clubs and commercial ports.

The Seabin can catch an estimated 1.5Kg of floating debris per day (depending on weather and debris volumes) including microplastics up to 2mm small, which are currently being ingested by fish and entering the human food chain.

If plastic bottles, bags, crisp packets and cigarette butts can be caught, the Seabins, themselves made from recycled plastic, can also remove oil and detergents from the water.

How does the Seabin Project Work?

Each Seabin moves up and down with the range of the tides. A submersible water pump, capable of displacing 25,000 litres of water per hour, creates a flow of water that drags the rubbish into the bin. The water passes through a catch bag inside the Seabin and is then pumped back into the marina, leaving litter and debris trapped in the catch bag to be disposed of properly.

The most effective Seabin Project pump operating today is electric and costs around $1.00 per day to operate. However, Seabin’s builders hope that as solar, wind, wave and turbine technologies improve and become more accessible in locations most in need of increasing Marine Sustainability, alternate power sources can be used to clean the ocean.

Who Is the Founder of the Seabin Project?

Avid surfer Pete Ceglinski is one of the two co-founders of the Seabin Project. A passion for the ocean drove Ceglinski to quit his job to fight against ocean pollution and work towards Marine Sustainability. The Seabin Project was founded in response to human overconsumption and waste mismanagement and aims to use crowdfunding (rather than funding from companies responsible for large-scale pollution) to improve Marine Sustainability across the world.

Will Clean Oceans Ever Become A Reality?

According to the founders, the Seabin Project is just the start of ending ocean pollution. Education is the real final solution. The Seabin Project offers its own unique and regularly upgraded educational programme, which can be used in schools and youth groups to ‘teach the future stewards of our planet about the current situation of our oceans, regarding plastic pollution and how to reduce their plastic footprint’. Helping to build and encourage creative minds to generate solutions to the Marine Sustainability problem could prove effective in reducing plastic in the ocean.

Interested in Marine Sustainability? Here are 4 Reasons to Act for the Ocean.

Looking for a new job? Read our 7 Reasons to Work in the Marine Industry.