Here are the best aircraft of 2018 as delivered by Farnborough Air Show 2018. 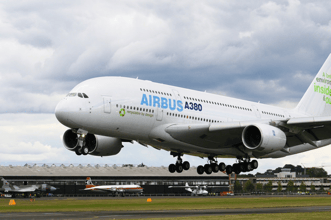 Topping the list of best aircraft of 2018 is the Airbus A380. Airbus manufacture some of the most popular plane brands around. The Airbus A380, the largest passenger plane, has proven particularly useful in helping airlines respond to the current growing demand for commercial flights.

The Airbus A380’s ability to carry more passengers than any other model has increased its popularity in controlling airport capacity, which has this year reached breaking point in many countries around the world.

Boeing are the world’s largest aircraft manufacturers, as illustrated at this years’ Farnborough International Air Show when the company received approximately 900 orders, also highlighting the aircraft’s immense popularity. The Boeing 737 MAX 7 is the newest and smallest version of the 737 series passenger aircraft with an efficient engine and split-tip winglets which improve wing efficiency. The Boeing 737 MAX 7 is suitable for flying at high altitudes and in hot climates and is on track for delivery in 2019.

The COMAC ARJ21 is China’s first modern airliner and Chinese airlines are expected to order more than 6,300 airplanes in the next 20 years, worth a grand total of around $1Trillion. This model is a 90-seat aircraft for short-to-medium range duty. The impressive COMAC ARJ21 is considered by many to be becoming a serious competitor against the likes of aircraft giants Airbus and Boeing.

The Cessna 172 Skyhawk is a jumbo jet with the capacity of between 416 to 524 and a long-standing history, having taken its first flight in 1955. Since then more than 44,000 of this model have been sold around the world. The Cessna 172 Skyhawk is an aircraft commonly used by student pilots due to its user-friendly nature, and it is also used for aerial surveillance by the US Border Patrol. Credited for its reliability and affordability, this is a worthy inclusion on the list of best aircraft of 2018.

The best-selling single-engine four-seat aircraft for over a decade, the Cirrus SR22 is an impressive piece of machinery. In fact, the Cirrus SR22 was flown by Ryan Campbell in 2013 when he became the youngest pilot to travel around the world solo. The aircraft is admired for its lightweight frame and relatively simple controls in addition to its remarkably designed parachute system, considered to be one of the best to date and making the Cirrus SR22 one of the best aircraft of 2018.

The ATR 42-600 is a twin-turboprop aircraft and the first US operator of the -600 series. It has 46 seats in a 2-2 configuration and is newly designed, technologically innovative and eco-friendly, and primarily used for short-haul travel. At Farnborough International Air Show 2018, Silver Airways debuted one of these models in their new bright pink livery.

Next on the list of best aircraft of 2018 is the Embraer E190-E2. The Embraer E190-E2 has new engines, new avionics and improved aerodynamics which allow it to travel up to 2,850nm and carry 97-114 passengers. As stated in Airways Mag, this model is expected to be 7% cheaper per trip than its rival, the Airbus A220-100. In addition, the cash operating cost for each trip is 30% less in comparison to the Airbus A320neo, making the Embraer E190-E2 a generally more economical aircraft.

The F/A-259 Striker is the new version of the L-159 light attack trainer aircraft. It is a light multirole combat aircraft considered to be a cost-effective strike plane and contains features such as radar, avionics and weapons. Currently the F/A-259 is being marketed for the US Air Force OA-X and the model will mainly be used for shut air help, counter-insurgency operations and border patrolling with interception capabilities.

Last on the list of best aircraft of 2018, but by no means least, is the Lockheed Martin LM-100J. Famous for its cargo delivery capabilities, the LM-100J’s success with firefighting missions and many commercial and government duties, such as transporting large cargo and carrying important individuals in special passenger accommodation, are evident. Special features which aid this aircraft include an advanced stall warning system, windshear detection and terrain avoidance warning system. Lockheed Martin are also investigating into further technologies; for example, an infrared imaging system with sensors to aid vision at night, making this a very promising aircraft.

Read about the best aerospace companies to work for, or learn about the future of the aviation industry.

How Airlines Can Meet Sustainability Targets

Aerospace and Aviation generates 2% of the world’s carbon emissions, with one flight producing more CO2 than the average...

Working in Aviation: 5 Myths and Facts

Following the devastating impact of Covid-19 upon the entire world and the majority of its industries and communities, t...

Solving the Aerospace Skills Shortage by Recruiting from Other Industries

In addition to the Covid-19 pandemic and rapid increase in demand for leisure and business flights over the past decade,...