The talk of the dockside wherever you are in the world, foiling is set to transform the Marine industry. The America’s Cup is harnessing hydrofoils to drive lighter boat structures and faster racing yachts, with huge positive changes heading for international yacht racing.

What is a Foil and How Does it Work?

Getting boats to fly above the water surface is simple in theory but challenging in practice. Challenging designers over the last century, Marine Engineers have recently found a solution in yacht design and technology.

A sailing hydrofoil is a sailboat with wing-like foils mounted under the hull. As the craft increases its speed, the hydrofoils lift the hull up and out of the water, greatly reducing the wetted area, decreasing drag and increasing speed. A sailing hydrofoil can twice exceed the speed of wind, marking one of the biggest modern breakthroughs in sailing.

How is the America’s Cup Enhancing Sailing Technology?

The America’s Cup yachts look ordinary at first glance, however under the water lie significant differences in foil designs and control systems. Since the introduction of foils at the America’s Cup, foiling flight has made race tactics more varied and more exciting.

Roles of yacht racing crew on board are also changing, giving unprecedented levels of control to the helmsman. When combined with the lift on the ban of several maneuvers and tactical options, hydrofoil can implement very small changes that prove vital to winning or losing the America’s Cup.

Impressive budgets and large design teams are driving the foiling revolution. The America’s Cup has invested significant sums into foiling development – more than any other area of the sport – which has resulted in accelerated development, the use of foils by both monohulls and multihulls, and positioning yacht racing teams at the beginning of the age of foil-assisted sailing.

How Will Foiling Change the Marine Industry? 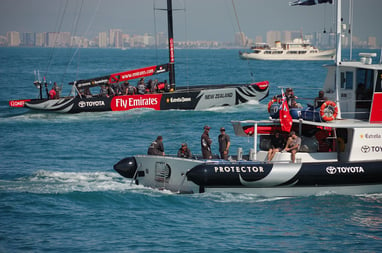 Hydrofoil technology in yacht racing will soon be incorporated across the Marine and sailing industries. Foils will improve the stability and control of cruising yachts and empower faster speed and higher performance.

We’ve long had the technology to travel faster, but the biggest benefit of foils to the Marine industry is the ability to fly above the weather. Foiling has resulted in reliable schedules and efficient travel, which could also be possible with modern offshore foils that allow us to travel fast enough never to have to sail in bad weather.

Improving performance and stability while allowing a smoother, faster and more exhilarating sailing experience, foiling is fast spreading across the Marine industry.

Catch up on the 5 Best Moments of the Superyacht Cup.

Want to work in the Marine industry? See and apply for all our Marine jobs.