How AR Will Play A Role in Naval Combat

Large institutions can sometimes be slow to adopt new technology. New systems take time to learn and may not always integrate well with current standard procedures. Although retraining teams can be time-consuming and expensive, some new technology is so revolutionary it can’t be ignored.

Defence giant BAE Systems has announced plans to begin trials of an augmented reality (AR) system on a Royal Navy ship as early as 2019 in part of a £20 million investment into new technology. If all goes well the system should be operational in the field by the end of the year.

What Is Augmented Reality?

Augmented reality describes any kind of technology that allows you to view the world with additional information or interactivity. Whether accessed through a phone, smart glasses or cybernetic eyes in the future, augmented reality layers more onto the world than what exists in front of you.

Augmented reality (AR) can give you general information or let you select something in your field of vision to go into more detail in the form of webpages, definitions, diagrams or simulations.

AI has powerful potential for military application, which is why Defence companies are looking into higher investment than other emergent technologies.

How Could AR Help the Navy? 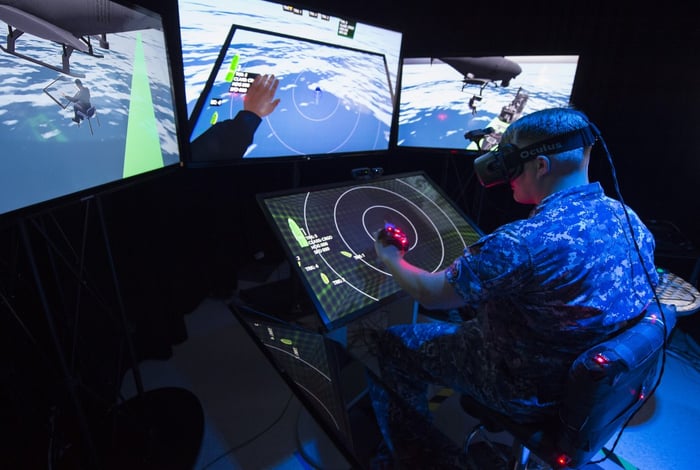 Knowledge is power, and a more complete understanding of the battlefield will give any military power an advantage. Being able to call up maps, accurately gauge distances or even track enemies could all be possible through augmented reality, without extra time or effort. AI in the Navy would take the form of integrated audio and visual feeds, whilst still allowing for maximum spatial and environmental awareness.

BAE is utilising the same type of technology found in the Striker II helmet display used by Typhoon pilots in their design, taking the shape of eyeglasses instead of a helmet. These AR glasses would be able to deliver accurate information at a glance and allow officers to interact with that information or relay it to others. The AR glasses allow for increased flexibility and autonomy, empowering individuals to learn more about whatever they’re looking at. AR in the Navy also means the user can flag anything they believe to be dangerous without having to go through other people to get it reported.

Here's How the Royal Navy Has Changed Since WWI.

AR in Defence: Problems and Solutions

Currently one of the biggest problems facing new AI technology is the glare that comes off the ocean, as it confuses the tracking and dentification software. But in principle the technology is there and will be able to increase the synergy of the team.

An augmented reality combat helmet called GunnAR is currently being tested, giving active combatants a heads up display (HUD) that can react on the fly as situations develop. It can help to identify targets, and make more accurate attacks upon enemies. It can see in infra-red and relays information to a tablet where another officer can direct user attention to certain things in the field, like a spotter would for a sniper.

However, one area of concern is what happens when people become too reliant on these augmented abilities. Being able to look at something and immediately know what it is, how it operates and how best to disable it is helpful until Navy personnel can no longer operate without it.

Alternatively, what if a system highlights a civilian as an aggressor? With no reason to question it, and having been trained over time to follow orders, military personnel run the risk of being complicit in war crimes made by a machine.

At this time it’s unclear how widespread the use of Navy AR systems will become. However, one thing that’s clear is that technology is changing not only the way we wage war, but the way we see the world.

Learn more about How the Military is Using New Technology or read about the Future of the Fighter Jet.

Revolutionary designs, environmental emergencies and urgent skills shortages – what are the most pressing issues for ind...

Future of Marine – How TYNC’s Boat Design is Disrupting Sustainability

What Does The Future Hold For Marine Sustainability?

The ocean is incredibly important to all life on earth. Significant elements of the food chain live in the ocean, and po...